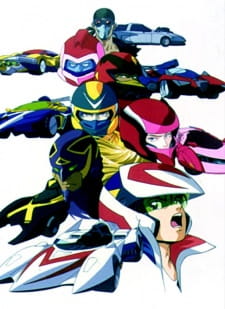 The Mach is a racing car loaded with a new engine "X" specially developed and built by a man named Kenich Hibiki who was a racing driver as well as a motor engineer. However, in a test driving made prior to its completion, he was involved in an accident and judged as dead. Meanwhile his father Daisuke who was watching the test driving all the way recovered the wrecked car as his son`s memento. A few years later the damaged car rebuilt by him revives as the new Mach which comes to participate in Grand Prix. This time, however, for the purpose to protect the driver from a possible accident, the new car is equipped with a safety system called "Safety Seven" with seven guarding devices. Also, it is loaded with the engine "X" that miraculously survived the tragic accident. Now its driver is Go, younger brother of Kenichi, who is determined to succeed to his brother`s will. In fact, he successfully participates in Grand Prix and keeps growing up to be a top racer of the world.